30 of 300: Anniversary Year Kicks Off with Celebration of Ray Cornils

On January 22nd, First Parish Church launched our 300 Years On the Way with a fitting party: the celebration of Minister of Music Ray Cornils’s 30th Anniversary with the Church. Ray will be retiring from his ministry closer to our official 300th anniversary, but this day was a chance to enjoy the ways we have sung together as a community since January 15, 1987, when Ray arrived in Brunswick. 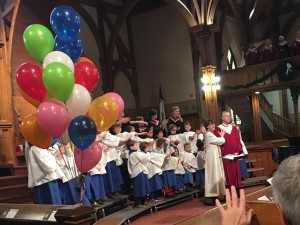 Choirs of all ages joined in song and gave thanks for the ways in which Ray has nurtured a music ministry in which all are invited to make a joyous noise to God. Junior and Cherub Choirs paraded into position to sing carrying 30 balloons (with only a few strays in the rafters!), and led the congregation in a hymn that they composed for the 300th anniversary. The combined Adult, Westminster, Junior, and Cherub Choirs joined together with piano and bells to sing The First Song of Isaiah by Jack Noble White, a piece that Ray has been carrying and teaching to others for almost 40 years and has been a touchstone in his ministry. All the congregation took part in a grateful moment through a blessing of Ray and a prayer of thanks for all his gifts.

After worship, we celebrated with a reception for all to say thanks in person. Ray spoke and gave thanks for persistence learned through his family, for a community to join in, and for the space and time which he found here to grow and develop as an artist, a leader, and as a person of faith.

A word of thanks for 30 years…